Disclaimer:  I am not recommending to the reader of this article any diet plans or to follow what I do, just showing an example of how I eat what I consider to be clean and cheap eating.  Always do your own research and figure out what works for you (as long as it doesn’t come through a drive thru.)

I’ve been eating the exact same breakfast for about the last 5 years now.   I say about because the only time it’s varied is when I’ve been away from home, but even then I eat pretty similarily if feasible.

The breakfast I consume is a combination I acquired after reading about what healthy populations around the world consume, what athletes, dietitians, nutritionists, healthy people in general consume, and especially through books like “the Eat Clean Diet” by Tosca Reno (the best book I’ve come across on clean eating, which led to my super oatmeal combinations!)   The analogy I love the best within Tosca’s “Eat Clean” books is to make your body a fat burning furnace (by regularly consuming healthy foods throughout the day via small meals thus keeping the fire stoked.)   The super oats combination table is great too; essentially you add a nut, and/or seed, and a fruit to your oatmeal, and adding that really does make it a superfood (there are more options you could add too, like spices or bee pollen.)

Though you think you’d get sick of eating oats every day for five years like myself, if you switch up the combinations, you could just about have a different kind of super oats every day for the rest of your life.  Example; my super oats additives yesterday were walnuts (1/4 cup is what I typically add for any type of nut I add in, which is always almond, walnut, or pecan) a granny smith apple (diced up finely,) lots of cinnamon, and flax seed.  Today it was almonds, frozen blueberries, and chia seed added in, with a hint of pumpkin pie spice (pictured below.)

Besides the oats, I eat three organic eggs, sometimes with a little bit of yolk taken out of each egg, (which the dog happily eats.)  Dog pictured post egg: 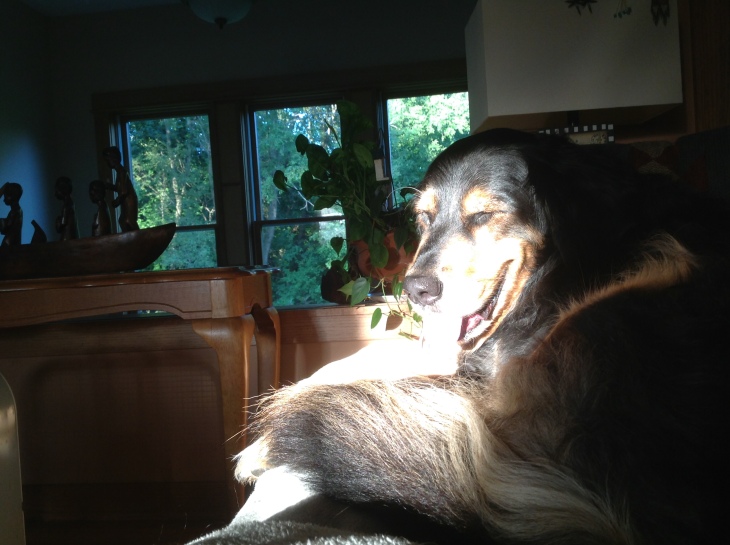 Most people might think that’s a bit heavy on the egg consumption, (and they might be right, I doubt most dietitians would recommend more than one egg a day).

Anywho, I get those organic Larry Schultz eggs for $3 a dozen at the River Market co-op and for all the nutrition you attain in a week within those 12 eggs (an egg is high in protein, omega 3 fats, selenium, phospohorous just to start) I think it’s hard to find a better food value.  I did start out at 2 eggs per day btw when I first started this eat cleaning business, but I graduated to 3 eggs per breakfast after about a year.  I also don’t eat a ton of meat, I stopped drinking milk about five years ago, and don’t eat a ton of animal, so I think I can get away with that.  And though eggs are high in cholesterol, it’s a “good” type of cholesterol, and there is a lot of evidence that it doesn’t raise your cholestrol levels like it was mostly assumed.

Regarding eating eggs and raising cholesterol, here is a great story I am going to relate from memory regarding Jesse Ventura, the former frogman, Pro wrestler, and unlikely Governor of Minnesota (I think it may have been an interview from a Men’s Journal article a few years back.)  Well he said in the 1970’s he was eating a dozen eggs a day (EVERY DAY!) and after doing this for a year or two, his mother, who was a nurse was concerned about his cholesterol levels from eating so many eggs, so she had him get his cholesterol levels checked from the dozen egg a day diet, and his levels were not only good, they were below average.  He was very active, and I don’t think that too much of any food (besides organic vegetables) would be a good idea for most anyone, but it makes you think about what we really know about optimal food consumption, and have we learned that much since the 70’s.  I definitely think we’ve learned a lot since then, but misinformation still abounds at the same time today, much as it did back then.

Skip to this section for the nuts and bolts:

Really got off track there with story time.  Here we go for a cheap, clean breakfast rundown.  Say you buy a dozen eggs for the week for $4 (they’re at least that much most places.)  Some may look at the price of a dozen eggs for $4, and be dismayed..but think about it for a moment; if you cook two eggs for breakfast each morning, you have the best source of protein to start the day for a about $.70   Contrast that to buying a “value meal” at the local drive-thru “restaurant” where you get one runny factory farm egg sandwich value meal fried in cheap oil for $4 plus dollars.  Not only do you save over $3, but with the “value meal” besides a moment of brief taste satisfacton likely driven by an overabundance of sugar, salt, and fat, (not to mention simply processed carbs) you’ll feel hungover and tired after eating it (at least I do when I rarely eat that crap).  You see there is a whopper of difference in value.  Speaking of whoppers, you are what eat, so avoid those!

Now onto the oatmeal; when I think of complex carbs the mighty plain oat stands out as one of the most complex, next to almight quinoa, which by itself is a complete protein (containing all of the essential amino acids).  Let’s call Quinoa the Nikola Tesla of complex carbs for it’s value (IMO) and oats the Einstein of complex carbs.  I like steel cut for the crunch, but any plain oat is better than the packaged crap filled with some form (or many forms) of sugar.  Plain oats are so cheap, especially at the bulk bin, or at ALDI, really anywhere, and they are filling and slow digesting (because of being high in fiber/roughage,) decent in protein and great in so many other ways nutritionally.  Surprising that they were mostly used as horse feed up until the 1700 or 1800’s.  Thank the Scots for discovering the use of them for human consumption.   Anywho, I can get a pound of organic oats at the co-op for about a dollar to a dollar and a half depending on if they’re on sale.  I often get the 4lb box Irish Steel Cut Oats from Costco for around $5 as well, (those are now my favorite, lot’s of fibrous body in each bite.) That amount of oats will last for weeks, and will cost about a quarter a serving.

The additives (nuts, seeds, fruits, etc.) are where things get more expensive but fear not!

This is where bulk buying at Costco, or even when things are on sale at any store comes in handy.

At Costco I switch between the wild caught blueberries, and organic triple berry blend (both under $10) and then when apples are in season I buy those 3lb bags at Trader Joe’s for only $2.99.  The apples provide the fruit for the super oats for almost two weeks, and the frozen fruit lasts for at least a month (small handful in each super oats batch.) For the nuts, I always but those at Costco, because they have by far the best price, and for only about $11 I buy a 3lb bag of either almonds, pecans, or walnuts (usually rotate nuts purchased, but I do favor almonds.).  Any one of those bags will last for months (I put about six almonds in each super oat mix,) and by adding any one of those nuts to your super oats you’re adding a healthy fat, protein, and a great brain food, not to mention the innumerable other benefits of regular consumption of nuts.

Sometimes when buying stuff (I know this happened to me early on) you’re taken aback at the overall price initially of buying multiple things in bulk, but if you break down and extrapolate what these foods will cost on a per breakfast basis over a period of time, you soon find that you’re eating one of the healthiest breakfast’s you could for under $3 a day.

This is just one example of how eating super healthy doesn’t have to be expensive in the least bit.  Eating out is not only more expensive on a daily basis by quite a bit, but you’re also at the mercy of whoever is cooking your “food.”  Most places to maximize proft are going to use the cheapest and most ready available ingredients, which also most often happen to be the most unhealthy.  Not only that you’re at the mercy of whoever is cooking the food, but since fat, salt and sugar are easy, but cheap ways to add flavor, there is most often an overabundance of those ingredients added in.  What a terrible combo!

When you cook food for yourself you can meter out higher quality ingredients at your discretion and save a lot of money you would have spent from eating out.   It really adds up over time.  What a great combo!

If you were to somehow calculate the health cost of consuming that type of processed food on a daily basis, and how much you’re going to pay for it in the long run, (not to mention the energy crash in the moment you’re eating it, and the hours after) you would likely might be saving much more.  Also studies have shown consistently that the more you eat out on a weekly basis (particularly fast food even just once a week) the more your weight will go up, and the more your health suffers.* **

Here’s a picture of my super oats from today;

And here is amore visual pleasing one from a year or two ago with a fuji apple/chia combo (I always buy whatever the cheapest apple in season is.) 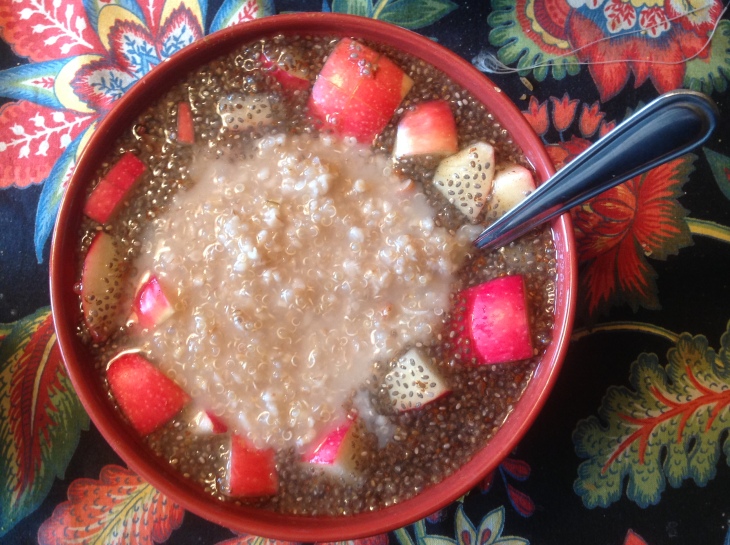 Health and Wellness Expert. Personal Trainer to the Stars (all clients are stars.) View all posts by Shape Shifters Fitness Trainer 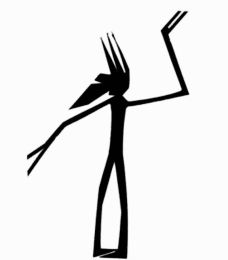 This is a text widget, which allows you to add text or HTML to your sidebar. You can use them to display text, links, images, HTML, or a combination of these. Edit them in the Widget section of the Customizer.
Loading Comments...
%d bloggers like this: